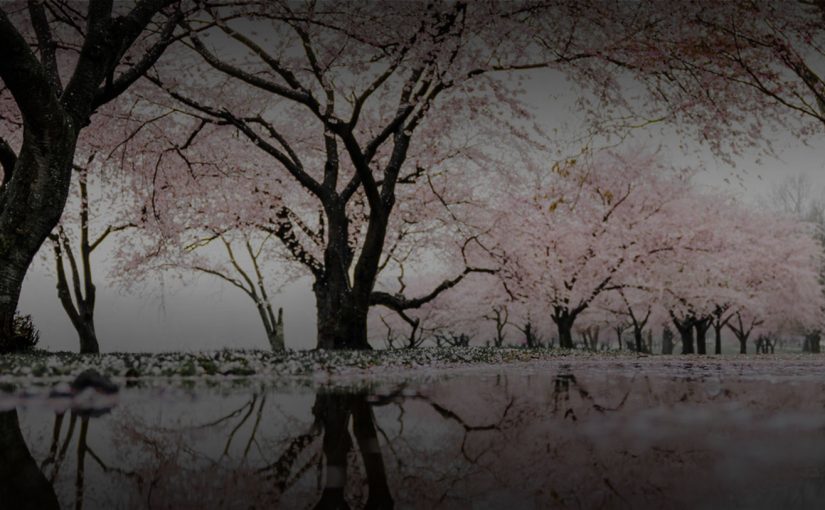 Autonomic dysfunction, as measured by heart rate variability (HRV), predicts outcome after myocardial infarction. Medications that enhance parasympathetic tone, such as beta-adrenergic blockers, improve outcomes. Although the detrimental effects of emotional stress on both autonomic function and cardiovascular disease are well recognized, the beneficial effects of complementary modalities aimed at reducing stress are less well studied. One-half of Americans report visiting practitioners of complementary/alternative medicine (CAM). However, rigorous research evaluating physiologic effects of these therapies is lacking. Reiki, an easily learned healing practice, is given by placing hands lightly on the recipient’s head and torso in a series of noninvasive positions. Psychological benefits include reduction of anxiety and perceived stress5. Reiki’s physiologic effects, however, are less well described.

To determine whether Reiki treatment would improve HRV in patients recovering from acute coronary syndrome (ACS), we randomized inpatients within 72 h to receive Reiki, a classical music intervention, or resting control while undergoing continuous electrocardiographic monitoring via a Holter monitor. Emotional state was queried by a 10-point Likert scale. Excluded were patients with conditions precluding HRV measurement or altering HRV or with life-threatening conditions. Of 229 patients screened, 49 met criteria and provided signed informed consent. The study was approved by the Yale Human Investigation Committee.

Throughout baseline and intervention phases, patients lay supine in bed, and quiet was maintained. During resting control, patients continued to lie quietly. For the Reiki arm, a Reiki-trained clinical nurse placed his or her hands lightly on the subject’s head and torso in 7 standardized positions. Reiki is an ongoing clinical program offered on Yale-New Haven Hospital cardiac units by a subset of Reiki-trained nurses. Participating Reiki practitioners (n = 5) attended training to ensure consistency of treatment protocol. A second control arm, purported to induce relaxation but without elements of human touch, included meditative music with tempos slower than normal resting heart rates, known to decrease heart rate, blood pressure, and catecholamines.

Continuous electrocardiogram acquisition and HRV analysis were performed as previously described. High-frequency (HF) power (0.15 to 0.40 Hz), a marker of parasympathetic activity, was compared between conditions.

To evaluate whether the observed effects of Reiki on HF HRV were influenced by clinical or demographic variables, we performed bivariate analyses of factors known to independently influence HRV on change in HF HRV (ttest, dichotomous independent variables, standard least-squares regression, continuous variables). Multivariate analysis was then performed, controlling for factors found to influence change in HRV (troponin and baseline HF HRV).

The mean age was 60 ± 13 years, 72% were men, and the mean ejection fraction was 52%. There were no significant differences between groups in these or other clinical variables (including myocardial infarction location, diabetes, smoking, use of beta-blockers, previous complementary/alternative medicine use). At baseline, there were no differences between groups in heart rate, but those assigned to Reiki had lower HF HRV. 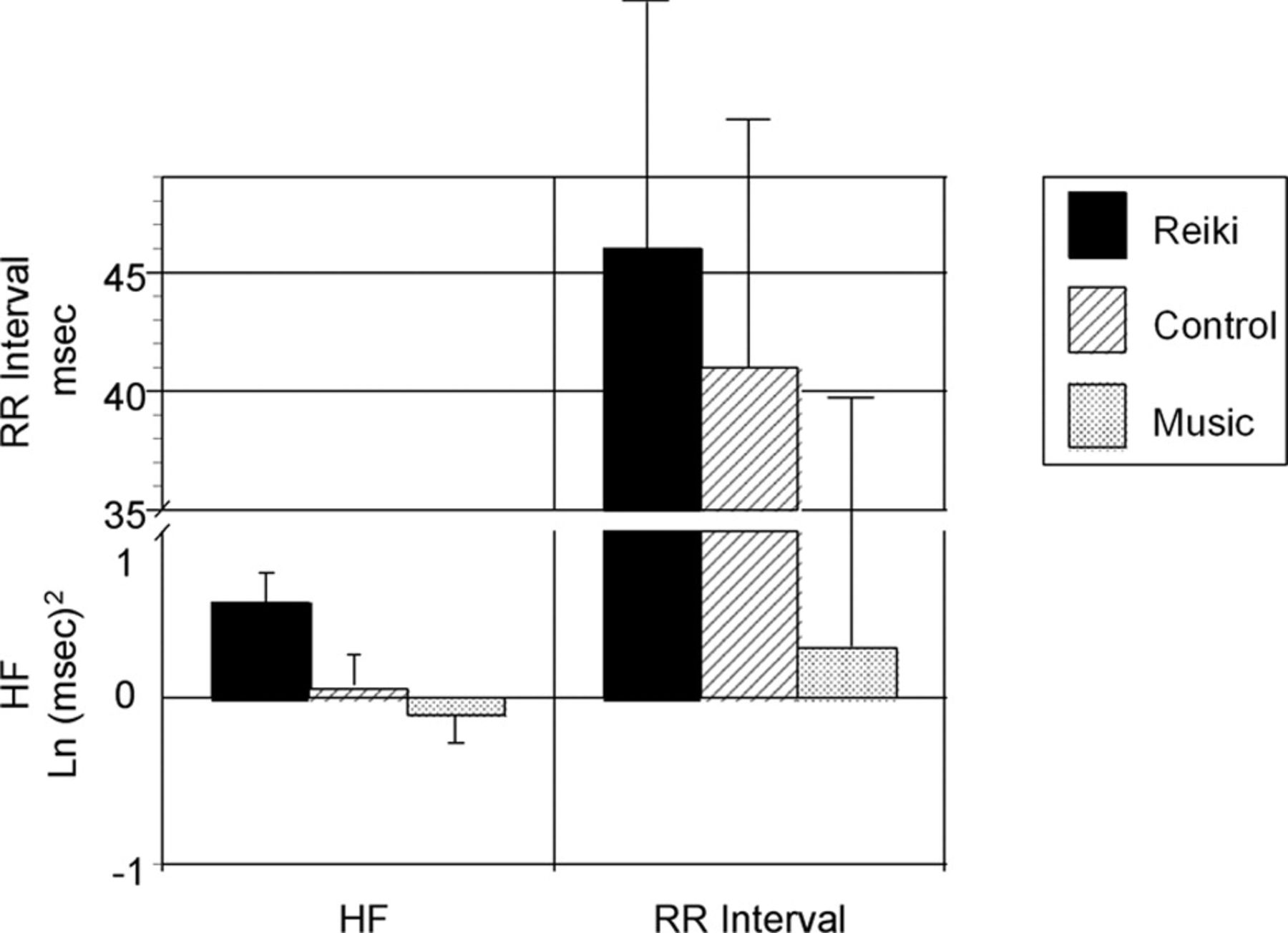 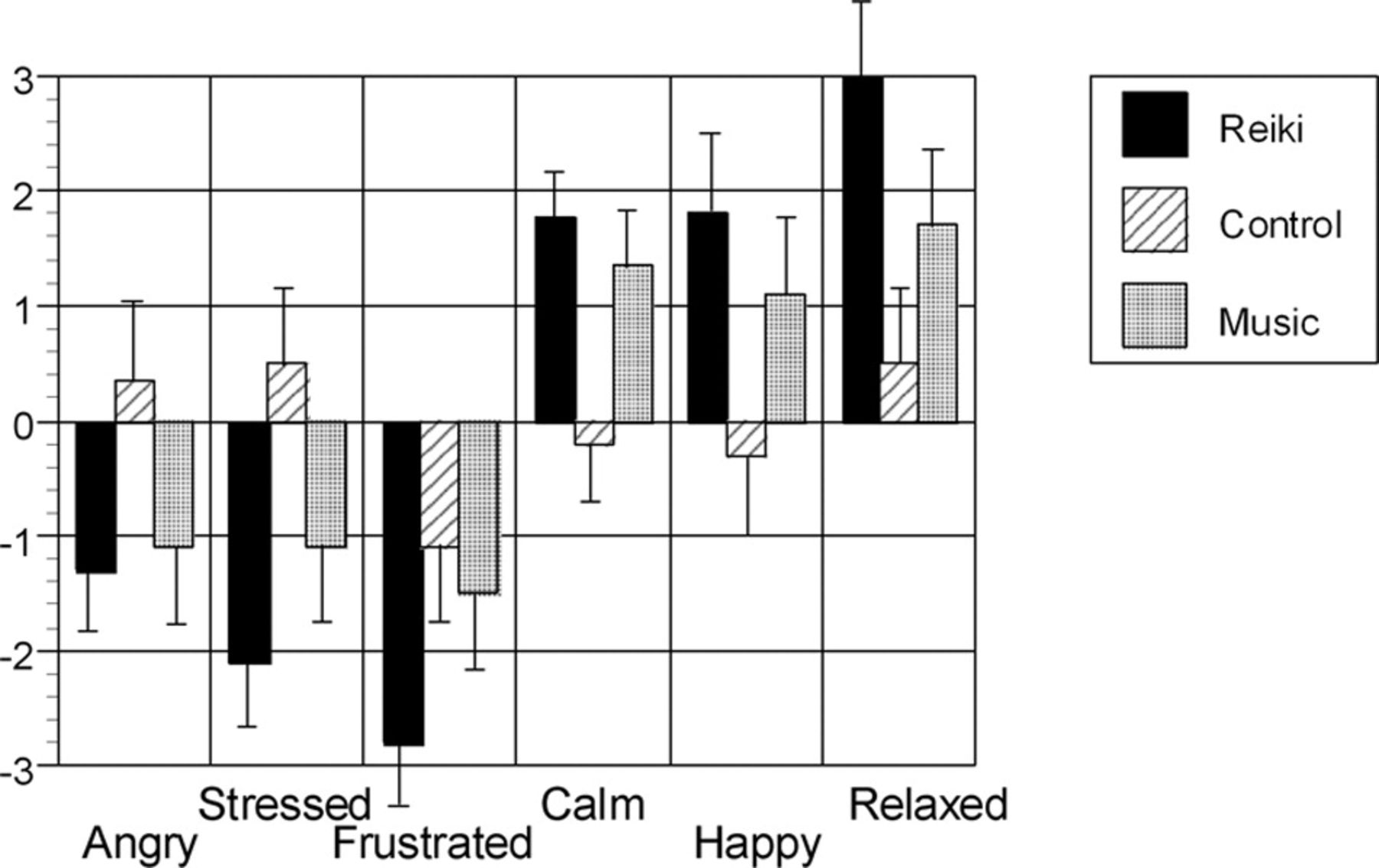 Figure 2
Effect of Intervention on Emotion

Values represent change in the level of emotion as measured by a Likert scale from baseline to intervention.

This study measured the short-term autonomic effects of Reiki in immediate post-ACS inpatients, a population with autonomic dysfunction in whom improvement in HRV is known to be protective. Reiki, administered by nurses, significantly increased vagal activity as measured by HF HRV, compared with resting and music control conditions, with a decrease in negative and an increase in positive emotional states. The magnitude of the effect on HF HRV seen was similar to that of propranolol in the BHAT (Beta Blocker Heart Attack Trial). These findings suggest a potential clinical role for Reiki in the post-ACS inpatient setting. Future research should evaluate whether Reiki treatment over a longer period can generate lasting benefits for autonomic balance and psychological well-being in patients after ACS.

Further, this study demonstrates that Reiki treatment is safe and feasible in the acute-care setting. There were no adverse events, and none were previously reported. The treatments were provided by Reiki-trained nurses working on cardiac units. This suggests that Reiki can be incorporated into standard hospital care to provide therapeutic benefit without additional cost or disruption of the nurses’ workday.

It is unknown whether the beneficial effects of Reiki treatment over music stem from the presence of another person, the presence of a person with healing intention, the light touch technique, or a combination of factors. Further understanding of the mechanisms involved in Reiki’s impact on autonomic activity requires comparison of Reiki with other control groups, including non-Reiki light touch and nontouch intentional human interaction.

In conclusion, in hospitalized post-ACS patients, Reiki increased HF HRV and improved emotional state. Further study is needed to evaluate whether Reiki treatment may represent a long-term nonpharmacologic approach to improving HRV and prognosis after ACS.

The authors thank the Reiki-trained nurses on cardiac units at Yale-New Haven Hospital, whose invaluable assistance made this study possible.